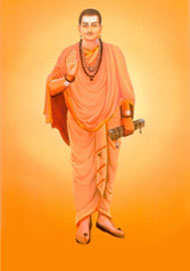 Vishwaguru Basavanna was a social reformer and a great humanitarian who was mainly responsible for reviving Veerashaiva religion in 12th Century. He introduced the system of wearing of Shivalinga upon one's body (Ishtalinga), subsequently Veerashaivas were called Lingayats. Basava lived in the 12th century (1134 – 1196 CE). When he was young, he travelled from his native Bagevadi to Kalyan in India between 1157–1167 CE during the rule of King Bijjala.

It is said that Basava, though born a brahmin, rebelled against the rigid practices of the caste-system then prevalent in Hinduism, and eventually began expounding his philosophy with a caste-less society at its core. Soon, his philosophy began attracting large numbers of people. Saints like Allama Prabhu, Akka Mahadevi and Channabasavanna also played pivotal roles in the spreading of the message and the true meaning of Lingayatism.

Basava lived and taught in the northern part of what is now Karnataka. This movement found its roots during the brief rule of the southern Kalachuri dynasty in those parts of the state. Like Martin Luther who came about three hundred years after him, Basavanna preached that the devotion of people to God was a direct relationship and did not need the intervention of the priestly class. Temple building is generally not practised among Lingayats.

After the death of Basavanna, his followers suffered immensly by the mobs who followed the seggregation society. Basavanna's followers had to run to remote places and hide the Vachana collections. Unfortunately only about 20% of the Vachanas could be saved by determined Veerashaivas, rest were burned by the people who did not want a change in the Caste System of India. This was a sad period in the history of Veerashaivism, which needed Kalyana Kranthi to revive Basavanna's understanding. It is sad even today the Castism is thriving well in our society.